Two important values to Rough and Ready citizens are education and fraternity. The Rough and Ready school (above) provided primary education to the town's children from its establishment on March 4, 1868 until it was absorbed into the Indian Springs school on July 1, 1953. The original building was later destroyed by fire and has since been rebuilt as a private residence.

Being able to meet with and support fellow Rough and Readyans was, and still is, central to the character of the town. In 1850, Rough and Ready founded the first church in Nevada County -- The Christian Association -- and hosted 7 thriving saloons. During the heyday of the town, numerous fraternal organizations flourished.  The International Order of Odd Fellows built what is now the Grange Hall, and established the Mountain Rose Lodge of the I.O.O.F. in 1851. Destroyed by the fire of 1853, the hall was rebuilt the following year, survived several fires, and was later deeded to the Grange when the Mountain Rose Lodge was joined with the Grass Valley lodge.

A dispensation was granted to the 20 Brethern who started a Masonic lodge in 1851 and, on May 3, 1854 a Masonic charter was issued to the Rough and Ready Lodge #52 by MW Charles M. Radcliff, Grand Master. Led by A.C. Kean (Master),  J. Heritage (Senior Warden),  J.L. Moore (Junior Warden), W.H. Buchanan (Treasurer) and Edmund W. Roberts (Secretary), the lodge succeeded for a number of years. In 1858, due to the failure of the local mines, the lodge under Master Roberts surrendered its charter and affiliated with the Madison Lodge No. 23 in Grass Valley.

The Fire of 1859 destroyed the Church, the Masonic Hall and 5 of the 7 saloons.

The Great Republic of Rough and Ready 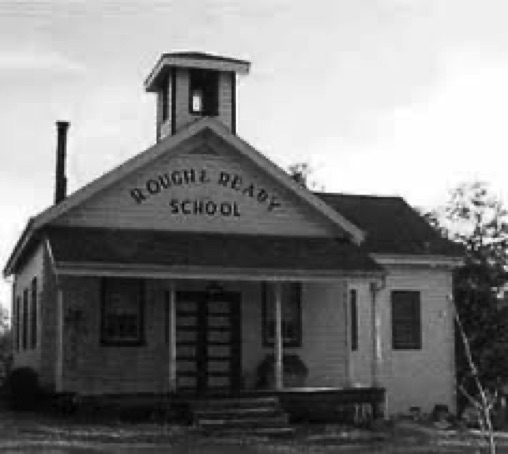 Rough and Ready School Class of 1914.